In January of 1996, I drew this innocent (to my mind) little cartoon. It went past my syndicate editors at the time, who, I admit, possessed the combined I.Q. of drain hair, however, they - as I - saw nothing wrong with it. It passed the scrutiny of features editors both in North America and abroad, also without hiccup. Then it appeared in print, and Sunday schools country wide were curtailed so their teachers might retire to restroom stalls and object in hyperventilating privacy. Chickweed was canceled forthwith, most noticeably at the Houston Chronicle.

A letter sent to my syndicate, and speaking for many like-minded people, blurted, "THAT IS THE LAST STRAW!" Previously, I gathered, I had been providing enough straw to supply a good sized dairy farm and have enough left over for a tableau vivant nativity crèche; but the very last straw was this one.

For those of you who cannot see the 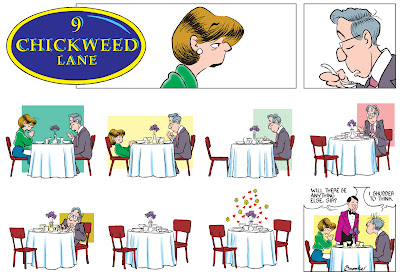 cause of the objection, you are fine, unsullied people, most likely dull company, but fine nonetheless. For those of you who see an act of oral sex, shame on you. Your Sunday school class is waiting.

Passing my eye with reluctance over comment and speculation about Chickweed (reluctant because I know all the answers and am, therefore, tempted to blurt them), I have noticed a lot of math come to bear in divining Juliette's age. The question as to the fair lady's years has become a matter of some dispute now that the current Chickweed story has become fixed in time, beginning in 1944 and moving on to 1954. Drawing on earlier Chickweed cartoons, various readers have been able to provide proof that she was born in 1960, 1955, and anywhere else on the temporal spectrum. They also point out that in my earlier strips time moved at half speed, one year in cartoon time for every two in reality. I have also been attributed with stating Juliette's age, proving that she cannot be whatever else anybody is putting forth as proof positive.

I just want to point out that nothing previously stated or written or drawn or discussed means anything anymore. When I began the story of Edie, Kiesl and Bill, I set it in the final years of World War II, at which point the floppy, imprecise world of the cartoon timeline evanesced, leaving not a rack behind. We are now fixed to an actual passage of events. I can't play fast and loose as I had before. The Timex keeps ticking. So forget the math.

Anyway, ultimately, my characters are who and what I say they are, and they say what I tell'm to say (except, of course, when they refuse).

I read from time to time ascriptions of my thinking, as revealed in what I draw, stated without doubt, or second thought. Using my work as evidence, I am imputed with the loftiest of philosophies at one end to the most vulgar and disreputable obsessions at the other. These imputations are stated by actual fans (not detractors) all without even the slightest question as to accuracy ("Dear Sir, Am I correct in inferring that you are a scuzzy fetishist and S&M purveyor?").

They are also, inevitably, unerringly, wrong.

What is revealed by such commentary is not what is on my mind when I draw, say, a shapely ankle or write a rococo locution; it reveals only what is on the reader's mind.

I have received an astonishing amount of mail from readers about the story of Edie Ernst, U.S.O. Singer. I have never received so much mail before. I haven't been able to answer it and concurrently keep the Chickweed and Pibgorn dynamos turning. So, please, to all of you who have written to express your compliments and kind words regarding this story, my thanks.

You are most kind.