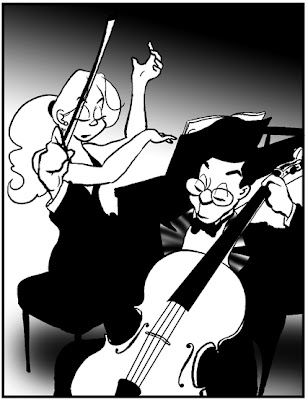 Inquiring minds want to know.  What was the piece Edda and Amos played at the Concours Forrestier International in Brussels?  I have to admit, all the way through illustrating the actual performance, I heard the cello version of César Franck's Violin Sonata (which Franck offered as an alternative to the violin).  It wasn't deliberate.  I just couldn't get it out of my head.
I have drawn cartoons during which I couldn't expel "The Ballad of Gilligan's Island" from my mind, so I consider myself lucky.
Anyway, that's the poop.  In the drawing to the left, Edda and Amos are playing the final A.

A reader wrote to alert me that two Chickweed cartoons are corrupted online, one in the Houston Chroinicle archive, the other at comics.com. I exhumed the originals from my own cache, and post them here.
From 1998, the December 5 daily. 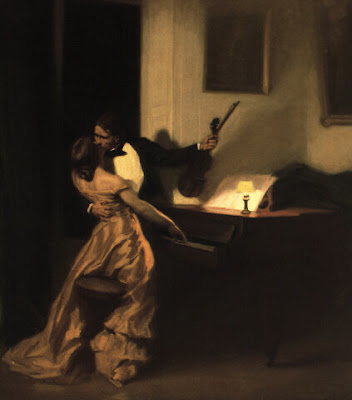 In today's cartoon (12/5), I pay homage to what I knew in my formative years as "The Tabu Ad," in the New Yorker (among other publications). It is, of course, not just a Tabu ad. The artist's name is René François Xavier Prinet.  He painted the work in 1901, and it went on to an illustrious career of shilling musk-laced scent.

Ignoring the fact that the gentleman with the fiddle is standing around the end of the piano, leaning over precariously to plant a smooch on his accompanist's scarlet wound of a mouth, while she begins to topple backwards, promising a scene but two seconds hence of both sprawled upon the floor amidst shards of violin and broken teeth – a moment worthy of Mack Sennett – there's still some mighty heavy breathing available in the image. I couldn't resist invoking it.

Really, to make it perfect, we just need the Keystone Cops, Stan and Ollie, and Ben Turpin waiting offstage, but, perhaps, another day.

Meanwhile, the question has been posed: Is the piano lid open in the last panel of the cartoon? Yes it is. It wasn't in Prinet's work, but I reached in and opened it. It may not be quite as open as it was in the first panel, but it's open.