WE HAVE A WINNER!

N. B. The original noun in this cartoon was not "imbecile" but "asshole."


However, such words cause syndicate editors to clench their buttocks so suddenly that they actually achieve liftoff from their cubicle chairs. So I wrote "imbecile." But all that doesn't matter. As if experiencing the intense need to prove the theory, a reader wrote it to object to the above cartoon. I didn't read the note (I never do), but my wife let me know that we had our winner. And a hissing and spitting winner he or she was too, I am told, evidently feeling that all my readers are dolts and idiots who should take up pitchforks and torches against the gag.

But this is the thing. IT WAS A GAG. It was also a universal truth about cartooning - not just my cartooning, everybody's. Immerse yourself among cartoonists, and the equal-and-opposite theory will surface, usually accompanied by the word "asshole" (a trademark expression belonging to the cartooning profession).

All that aside, our winner lets the rest of us off the hook. THE EQUAL-AND-OPPOSITE ASS-...um...IMBECILE HAS BEEN IDENTIFIED. Only, I don't know who he or she is. I only know that my wife is laughing.

That's enough for me.

THE DETAILS ARE SKETCHY

A question is posed from a reader on Gocomics as to the progression of events that formed today's 9 Chickweed Lane cartoon - the chick or the egg, so to speak. (click the image for a larger view.)


What I had planned for this daily cartoon was another in what is now a series in which the black background merges with the black dancewear in which Edda is attired. Essentially, I had planned that Edda would be nothing but a head and shoulders, hands and feet, on a black backdrop. Body positions would be implied. When I prepare these cartoons, I go to the length of drawing her completely, as you can make out through the sketchy crosshatching. I then fill in the black to merge with her duds, at which point a transformation takes place that always amazes me. (Take a look at the work of Coles Phillips, http://www.americanartarchives.com/phillips,c.htm, who was doing this sort of thing with brilliance nearly a century ago.)

However, when I composed the cartoon, I began to sketch in the background as you see, partially obscuring the shape of her body. And then, I stopped. This was just the final study for the cartoon as yet to be drawn. But I really liked what had evolved. Sometimes, you just have to stop yourself from going further and screwing up an image that you like, i.e., liking it to death; so I forbore and, without excuses or explanation, sent in the cartoon to my syndicate.

Most of the best things I do I cannot explain, I do not plan, are entirely accidental. I have played a movement of, for instance, the Märchenbilder of Robert Schumann when, out of nowhere my accompanist and I found ourselves doing something with the music so moving that on succeeding days we tried again and again and again to recapture it, and without success. Those moments don't yield to force of will. They just appear, then evanesce.

I'm not suggesting the cartoon above is anything like that. However, I liked it, and I had the sense to leave it alone.

Post Script: I am glad that at this stage of Chickweed's existence, my abiding readers are willing and disposed to welcome such images. However, I know that by the end of the day someone will write in to object. And it will be a choleric objection. It is part of cartooning, like the short straw, and always a source of amazement and amusement.

IT'S HARD TO GET NYC TO SIT FOR A PORTRAIT

Lately I have heard some speculation about the Friday cartoon for Pibgorn (below). 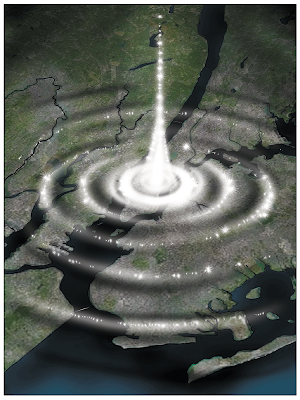 The speculation, on record at the Pibgorn page of Gocomics, concerns how I drew it, whether it was copy-and-paste, if I actually drew any part of it at all, und so weiter. When I happen upon such discussions, I hesitate to provide the answer only because I sense that the puzzle truly seems more enjoyable when unencumbered by a solution. However, in this case, I thought I'd supply the answer with the hope that it doesn't poop the party.

The above picture is the result of five layers of images (there were five when I finished assembling the image; I'm not sure what each one was). I wanted a fairly accurate representation of New York City and environs, so I first caught a satellite image of the area and, using Photoshop, distorted it to give the impression of a view of Manhattan from the south. I then carefully outlined the bodies of water in the picture, using those as the basis for the cartoon (the line art gives a basic feeling of cartooning with which I did not want to dispense). I then colored in the city, the surrounding boroughs, New Jersey, Westchester County and so forth. This was all by hand. Next I took another satellite image, distorted it, and used it to overlay my drawing at something like 60% opacity so some of my coloring and line art would show through. Following that, I shaded the whole image in such a way that night would appear to be encroaching on the city from all directions. (There was no logic to this. I just liked the look.) Finally I drew in the explosion, if you want to call it that. I did not cut and paste it, or any part of it. I did not use a photograph as a model. I just drew it. After looking at the layers I'd assembled, and making adjustments for shading and opacity, I merged them and called it an evening.

This, as is everything I draw in Pibgorn, was what I call white-knuckling it with the muse. I have a story, I have a plan for daily drawings…but they all go out the window as soon as I sit to draw. I find it hard to keep my grip on the reins, which is the way it will always be. When and if these images are assembled to make a book, changes will occur, new drawings will be created, old ones ditched, and more critical thought will be brought to bear. For the present, it's all rodeo.

On another front, there was a question regarding the story I call "Pibgorn, Mozart and The Demon Lover." Thorax asked Mozart (who was removed from 1791 Vienna to the present, somewhere in North America) if he might oblige everybody by performing a piano sonata. When Mozart saw the modern piano, he fell back in astonishment, asking what in heaven's name he was looking at. A present-day, acoustic Steinway (to pick one example) was an unknown instrument in Mozart's day, as removed from the fortepiano of Cristofori as an army tank is from a horse-drawn cannon. Likewise, modern classical performance would sound extraordinary to Mozart, not because of clarity, but because of instrumental color, volume and most of all intonation. The well-tempered system of tuning an instrument, common to all western classical music now (the Holy Bible of which is Bach's "Das Wohltemperierte Klavier"), was still new-fangled in Mozart's day, meantone temperament being the more common, and very raw-sounding intonation employed (notwithstanding the fact that musicians in those days were not altogether devoted to tuning to a common A, or, for that matter, tuning at all). Aside from that, instruments were simply softer in sound and entirely different in color from their present-day versions.

However, in the Pibgorn story Mozart fell back because he simply didn't recognize the grand as a piano.